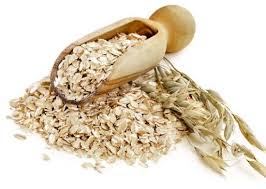 Oatmeal- that cheap cereal in the round container. There is a lot
more to this cereal than meets the eye. Oats are milled in eight
(8) different ways, each having its own uses.
UNHULLED OATS: Oats harvested from the field have an
inedible outer layer called the hull. Must be removed before the
grain can be eaten.
GROATS: The hull is removed from the oat via a mechanical
process. After steaming and roasting, the resulting grain is called
a groat.
STEEL CUT OATS: Groats are steamed and roasted to
inactivate the enzymes that may cause rancidity, and to impart a
toasted flavor. The whole groats are cut approximately into
thirds, but not rolled. Steel Cut Oats are also known as Scotch
Oats, Pinhead Oats(in Great Britain) and Irish Oatmeal. They
take longer to cook than rolled oats and have a chewier texture.
OLD FASHIONED OATS: The whole groats are steamed again
and rolled flat.
QUICK OATS: The whole groats are cut approximately into
thirds, steamed again and rolled thinner than Old Fashion Oats
because they are smaller and thinner.
INSTANT OATS: The whole groats are cut approximately into
thirds, steamed again and rolled thinner than Quick Oats. Because
of higher roasting temperatures and the thinness of the flake, they
cook when boiling water is added.
WHOLE OAT FLOUR: After steaming, roasting and cutting,
the groats are flaked and then finely ground. Whole oats flour can
either be purchased as such or made at home in a blender or food
processor from rolled oats.
OAT BRAN: The bran is the outer layers of the groat and is a
rich source of soluble fiber. About one-third of the groat is oat
bran. Steel Cut Oats, Rolled Oats(Old fashioned, quick and
instant) and whole oat flour all contain oat bran.
Source: www.ngfa.org/trygrains_oats.asp

Eat your Oatmeal !
Oat meal is a whole grain; meaning it contains all three parts of
the grain; the germ, endosperm and bran. The nutrients in whole
grains work together to produce maximum health benefits. When
grains such as wheat and rice are milled or refined, the bran and
germ are removed, leaving only the endosperm. The result is a
food with fewer vitamins, minerals, fiber, antioxidants, and other
phytonutrients than the whole grain.
HULL- The hull is the inedible outer covering of the kernel. An
oat is called a groat when the hull is removed.
BRAN-The bran consist of the coarse outer layers of the kernel.
It contains the greatest amount of fiber.
ENDOSPERM-The endosperm is the largest section and the
middle layer of the kernel. It is the main energy source of the
plant.
GERM-The germ is the embryo of the plant in its early stages. It
is the heart of the grain and
the smallest part of the kernel, but it is packed with nutrients.