Skip to content
Previous Next
Is there really butter in Peanut Butter ? 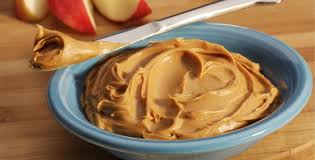 Lets start by talking about where and when peanut butter was
invented and introduced. Historians say that many countries
claim the origin of peanut butter. Chinese crushed peanuts into
creamy sauces for centuries, African ground peanuts into stews
as early as the 5th century. Civil War soldiers dined on “peanut
porridge” But their uses and appearance are not even close to
the modern peanut butter we consume today. An unknown St
Louis doctor in 1890 supposedly encouraged a local food
products company to make a creamed peanut paste as a
nutritious protein substitute for people with poor teeth who
could not chew meat. During the same time Dr. J.H. Kelloggs
began experimenting with peanut butter as a vegetarian source
of protein for his patients. The Kelloggs patent for the “Process
of Preparing Nut Meal” was in 1895 and was also know as nut
butter. In 1903 Dr. George Washington Carver began his
research at Tuskeegee Institute in Alabama. Dr Carver
developed over 300 other uses for peanuts and improved peanut
horticulture, he is considered by some as the father of the
peanut industry. Peanut butter was introduced to the world at
the Universal Exposition of 1904 in St. Louis, Mr. C.H. Sumner
sold $ 705.11 of this treat at his concession stand, this exposure
launched peanut butter on its way to being an American
favorite. All the peanut butter we have talked about so far does
not resemble our modern peanut butter, it was more gritty and
pasty and went rancid if not consumed in a short amount of
time.. In 1922 J.L. Rosefield begin selling several different
brants of “peanut butter”, his peanut butters were churned like
butter, giving them a smooth texture , which we are most
familiar with today. J.L. Roseboro was the first person to
receive a patent for shelf stable peanut butter. Swift & Co.
adopted this process for its E.K. Pond division and in 1928
changed its name to “PETER PAN”. Mr. Rosefield had a
dispute with Swift & Co. And started his own company, coming
out with “SKIPPY” in 1932. Proctor & Gamble entered the
business in 1955, introducing “JIF”.
WWW. Peanutbutterlovers.com