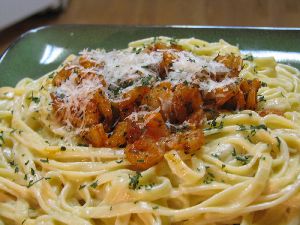 When you hear the name Fettuccine Alfredo, you think traditional
Italian, a dish with a rich combination of hot cream, butter and cheese,
gently tossed with freshly cooked long flat pasta called fettuccine.
You’d be mostly correct, Fettuccine Alfredo got its start in Italy,
but is served mostly in tourist traveled restaurants in Italy, not at home
by most Italians.
Fettuccine Alfredo was the master mind of an Italian cook Alfredo diLelio.                                   He created this dish in his restaurant in Rome, Italy in 1914.
Prior to this an authentic Italian dish, much simpler to prepare was a
common dish served though-out Italy . This dish called “Fettuccine Al
Burro” was a dish of fettuccine noodles dressed only with good aged
“parmigiano cheese” and lots of butter, (interpreted as double butter).
It is believed Alfredo created this dish when his pregnant wife lost her
appetite during her pregnancy. He prepared for her the traditional
Fettuccine Al Burro, with the addition of cream, making a triple butter,
(cheese, butter and rich cream). Alfredo was an extravagant character
who would use gold forks to serve his created dish to famous and
honored guest. Many American movie actors of the 1920’s – 1950’s
frequented his establishment in Rome, Italy, making his restaurant and
the dish “ fettuccine Alfredo” world famous.

“FOR THE HEALTH OF IT !!”
Fettuccine Alfredo – can not fall any where close to being healthy, if
made the correct method, this dish is loaded with fat. Consume in
moderation. Also you can use low fat cheeses to make it healthier.
Powdered ready mixes will be higher in salt and lower in quality.