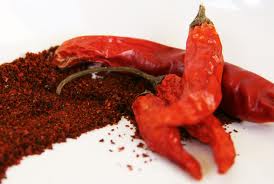 The powder that fires up your chili
They say you learn something new every day and this chef learned
something new about chili powder. I’ve used chili powder for years,
light, dark, quality brands and the cheap stuff. But I always thought
that chili powder was made up of only a single or a blend of dried
peppers, there’s much more to it than that. Chili powder is the name
used for any powdered spice blend composed mainly of chili peppers.
Many different chili peppers can be used to make chili powder, such as
Ancho, Cayenne, Chipotle, Mew Mexico, Pasilla, and Red peppers.
The most popular being red pepper and cayenne pepper. Chili powder
has a history going back to several hundred years in China, Asia and
South America. Many European countries also used fresh and dried
peppers in many dishes. Chili peppers are believed to originate in
South America and sent through out the world by explorers.
There are 2 main categories of chili powder. The first chili powder
simply comprised of a few to many combinations of ground chili
peppers, add to hot dishes and spice blends in Thai, Indian, Asian,
Mexican, Spanish, South American, and American cuisines.
The second type of chili powder is the chili powder that we know
today , a blend of different spices, used primary in American and
Mexican dishes. This chili powder is blended with paprika, red
pepper, oregano, garlic, cumin and sometimes salt, cloves and
cinnamon. The darker the chili powder the more chili peppers are in
the blend. The spice blend chili powder was invented around 1890, by
William Gebhardt, a German immigrant in New Braunfels, Texas, a
suburb of San Antonio. Fresh chili peppers were only available during
the summer months, making chili only a seasonal dish. Gebhardt
solved the problem by importing Ancho chiles peppers from Mexico,
allowing chili to be served year round. The product was first called
“Tampico Dust”, in 1896 was changed to “Eagle Brand Chili Powder”.
Chili powder is used primary to make chili con carne, a dish that has a
long history, many legend s, stories and fables, Chili con carne, or
chili as we call it, is an American dish that had it’s started in the
regions of Texas. You may have thought that chili was a Mexican
dish, but actually native Mexicans don’t make chili.
You can make our own chili powder blend. Many of the peppers you
will need are found in some supermarkets, and specialty shops. Chili
paste is a blend of ground chilies and water, to create a hot paste, used
in Asian cuisine. Chili paste can be found in some supermarkets and
Asian shops. Keep it Fresh: this is very important if you want to keep
the strong pungent powder. Keep in a cool dry place and in an airtight
container. Cautian _ on buying cheap chilli powders, they can contain
a lot of salt, very little chill peppers and , weak pungent flavor.