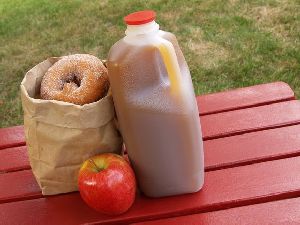 Shared from Facebook The perfect treat to celebrate autumn (or taste its flavors): apple cider doughnuts. Perhaps you've picked these up at a local apple orchard along with good, old-fashioned cider and apple butter. But have you ever tried your hand at making them from scratch? It might seem a little involved with chilling, cutting, and deep-frying, but we promise it's not all that hard! That sweet, gritty cinnamon-sugar coating and moist apple cider center are so worth the effort. Keep reading below for our recipe...
Print
Doughnuts
Glaze/Toppings
Instructions
By 12 Tomatoes
Adapted from 12 Tomatoes
Adapted from 12 Tomatoes
From The Chef To You http://fromthecheftoyou.com/
By Chef Dave|2017-07-28T01:56:52+00:00October 6th, 2014|Recipes, Snacks, Sweets|0 Comments

About the Author: Chef Dave

I have been in the food business since 1975. This has been my passion and life’s ambition and have enjoyed every day of it. I’ve created this site to share my passion for cooking with those that love to cook and those that would like to learn.