Skip to content
Previous Next
Sloppy Joe, The history, The joy of making! 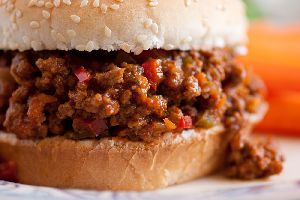 Are there any Sloppy Joe lovers out there, let me hear an Amen !
There’s nothing like a sloppy Joe on a fresh baked bun. The Joe
is a sandwich that all Americans can identify with from our
youth, school cafeterias and family dinners. To many people the
Joe is the quick “Manwich” brand sandwich in the can, but
there a lot more to it than that.. The sloppy Joe is served in
many restaurant across the country from diners to deli’s. There
is a restaurant & bar in Key West, FL named SLOPPY JOES,
that features their “ Original Sloppy Joe Sandwich. They claim
it has made them & Key West famous ”, with a delicious
ground beef in a sweet rich tomato sauce, with onions, peppers
and spices. Also their famous “Sloppy Fries”, steak fries topped
with Sloppy Joe’s meat sauce and cheddar and jack cheese.
In Lakewood, CO, two sisters have a diner called “SIMPLY
SLOPPY JOES. Their complete menu revolves around the Joe.
They have a basic menu featuring six different Joes “ Regular,
Spicy, BBQ, Plain Jane, Mexi Joe, Joe of the week.
WHERE DID THE NAME JOE COME FROM ?
There are two places that claim to have created the first
sandwich and Sloppy Joe name. One story says that the
sandwich originated in Havana Cuba “Sloppy Joes” was a bar in
Havana in the 30’s owned by a guy named Jose Garcia. The bar
got its name because his place was always a mess, and the
sandwich served there came to be known as a Sloppy Joe.
Around 1934-1935, Mayor of Maplewood, Robert Sweeney,
used to vacation in Havana and hung out at an old saloon called
Sloppy Joe’s.
When Sweeney returned to Maplewood, NJ, he described the
sandwich to Mr. Burdorf and partner Ron Joost, owner of
“Town Hall Delicatessen” and asked them to recreate it. To
this day the sandwich is served daily at the Town Hall Deli in
Maplewood, NJ. It is not the sloppy wet sandwich that we
know, but a triple layer made with a variety of meats on three
layers of thinly sliced rye, bound with Russian dressing and
laced with cole slaw.
The other story suggests that the sandwich originated in Sioux
City, Iowa, where a cook named Joe made loose meat
sandwiches, a Midwestern term for seasoned ground meat
cooked loosely in a skillet.

FOR THE HEALTH OF IT
Is there a healthy Sloppy Joe ?
To make a healthier sloppy Joe, use a leaner ground beef, rinse off the
fat. There are several vegan or vegetarian recipes that may be
healthier if you like no meat sandwiches. Adding sliced tomatoes ,
lettuce will not make it healthier, but make a better balance meal.