Skip to content
Previous Next
Is it Salad Dressing or Mayonnaise ? 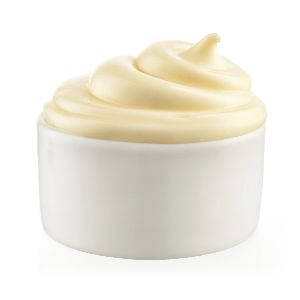 Have you ever heard someone say I don’t like mayo, I only use
salad dressing. Are mayonnaise and salad dressing two
different items altogether or are they a variation of the same.
You may be surprised to know that they are the same, made the
same way, with only a couple of small but distinctive
differences. Mayonnaise is a permanent emulsified cold sauce
made up of egg yolks, salad oil, vinegar, salt, sometimes lemon
juice, red pepper and dry mustard. It is prepared by slowly
beating oil and vinegar into egg yokes and salt. The egg yoke
traps the oil and vinegar and makes a smooth and firm white
cold sauce. Salad dressing is a name called for any cold sauce
that is made and served with or on a salad. White salad
dressing , like the kind you find in the store is actually
mayonnaise with a small amount of sugar added and is usually
but not always a little thinner . Can you use either mayonnaise
or salad dressing in any recipe as if the were the same? Yes !,
most of the time, personal taste may make you use one over the
other. Both can be used as a base to make a homemade salad
dressing, such as combining ketchup, relish, lemon juice and
making a 1000 Island dressing. Lets go back to the question at
the top. Yes a person can like salad dressing and not
mayonnaise even though they are the same basic item. Some
like the slightly sweeter flavor and much alsohas to do with the
product they were raised on.
The history of American mayonnaise The first commercial
mayonnaise was sold in jars in 1905, by Richard Hellmann’s, at his
delicatessen in Manhattan’s Upper West Side, New York, City. His
mayo was mass marketed and called “Hellmann’s Blue Ribbon
Mayonnaise” About the same time, on the west coast, a California
company named Best Foods produced its own mayonnaise, which
became very popular in the western United States. In 1932 Best foods
bought the Hellmann’s mayonnaise company. With both mayonnaises
having their own customer base they kept both recipes and sold them
in the appropriate markets. In 1917 Mrs Eugenia Duke of Greenville,
South Carolina, founded the Duke Sandwich Company , to sell
sandwiches to soldiers training at nearby Fort Sevier. The homemade
mayonnaise she made became so popular that her company began to
mass produce her mayonnaise. Duke mayonnaise is still popular in the
southern states.