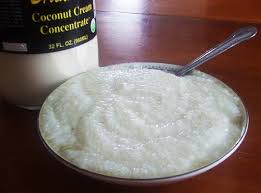 A southern dish that is a must have at many dinner tables. Grits are
popular in the “Grit Belt” from Texas to North Carolina. Let’s start out
with a story or maybe a fable: A northern gentleman was traveling
through the southern states and stopped at a restaurant. As the
waitress was taking his order, he remarked “ I hear you serve a dish
called grits in the south, can I try one” the waitress asked “one
what”. The man responded “ I don’t want a whole serving, just one
grit”. It takes many a grit to make a pot of grits. Let’s start out with
“what are grits”. Grits are a native American dish introduced to the
settler by local Indians. They prepared a hot dish called
“rockahominie” which is a ground softened maize seasoned with salt
and animal fat. Grits are corn, that is dried, then ground in a stone mill
the same way cornmeal is ground. The old traditional style was to
grind dried corn in a gristmill where the corn kernels went through
grinding stones and crushed. The grounded corn would be sifted
through screens , where the finer partials would be used as cornmeal
and the larger partials were used for grits. This method of grinding by
stone can still be found in some areas. This product is sold in specialty
shops. The traditional stone ground grits have a more coarse grain
texture and are a little healthier and higher in vitamins and protein.
Today most grits are processed using large modern equipment. The
first step in processing modern grits is washing the corn; then the
grains are steamed for a short time to loosen the hull . The hull and
germ are removed leaving a broken endosperm. Heavy steal rollers
crush the endosperm in granules. They are then sifted through
screens, where the larger partials are used as grits and the smaller
partials are used for corn meal and corn flour. Grits can be purchased
in three forms in most all stores. Regular: modern method of the old
fashion style, slow cooking version with a cooking time of 15-20
minutes. Quick Grits: are finer and take only 5 minutes to cook.
Instant grits: are also ground finer and will cook in just 1 minute.
Manufactures of grits have created many flavors of instant grits that
can be mixed with boiling water and are ready to eat.
Why are some grits yellow and others white ? Yellow grits are ground
with the whole kernel, hull attached, white grits the hull is removed.
Before we talk about cooking grits let’s look a something that is very
interesting and not thought of by most people. I stated earlier that
cornmeal and grits are ground by the same stone, smaller pieces are
corn meal and larger pieces are grits, that’s right grits and cornmeal
are the same product just ground differently. Grits are served mostly
for breakfast, but can be found on many lunch and dinner tables served
as a starch.

FOR THE HEALTH OF IT
Are Grits Healthy
Grits are a carbohydrate, very important in maintaining a well balanced diet( I
sound like a Dietician) People on a low carb diet may choose not to eat grits ,
but its more what you put on them, bacon grease, sugar, and butter is what
causes them to be less healthy. Moderation! Moderation! Grits are high in
vitamins B, including Thiamin, Riboflavin, Niacin and folate. Grits are fat free
and cholesterol free. Grits are also a good source of Iron and calciu