Skip to content
Previous Next
Chowder Clam – Corn & Many Others 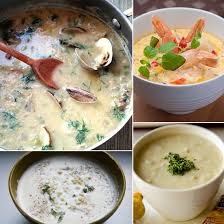 A chowder is a soup with a thickened
broth, featuring one main ingredient, fish, shellfish, corn, etc.
We can call it our featured ingredient. “ featuring tonight our
star ingredient CLAMS”, let’s hear it for that CORN !
Chowders can be found in sea ports all over the world, mostly
made of fish. Fish chowders were considered to be a peasant or
poor mans meal, because it was a pot of vegetables and the
catch of the day. Clam chowder is an American dish. Clams
and oysters were a popular food to Atlantic coast native
Indians, and over time settlers started to use clams instead of
fish. Chowder in Latin means Caldria, which originally meant
a place for warming things. Later it was changed to mean
Cooking pot. Others believe that the name chowder can from
the Old English word jowter (a fish peddler)
Many chowder recipes start out by cooking a side meat, such as
ham, bacon or fat back. This meat is cooked, removed and
added later. The fats rendered from this meat are used to saute
the vegetables. Milk, onions, potatoes are a standard ingredient
in chowders. Celery is also a popular ingredient but a personal
choice of the cook or region that is preparing the chowder.
Most people are familiar with white New England clam
chowder, when chowder is mentioned, their mind goes to white
clam chowder. Yes! New England clam chowder is most
recognized but several other chowder are more popular in their
regions of the U.S. Manhattan clam chowder, Rhode Island
chowder, Amish (Dutch) Chicken Corn chowders are but a few.
Like many other foods chowders have their loyal follower that
feel that their regional chowders and personal recipes are the
best. Newport R.I. holds an “Annual Great Chowder cook-off”.
Plymouth, Mass hold an “ Annual Pilgrim Chowder Festival”.
The city of Santa Cruz, Ca. holds an “Annual Clam Chowder
Cook-off”. Manhattan Clam Chowder is similar to New
England Clam Chowder except it has a no milk and diced
tomatoes are added. Manhattan Clam chowder became popular
in the mid-1800s when a large population of Italians came to
NY city and to the Portuguese fishing communities in R.I. To
many New Englanders, Manhattan Clam Chowder was an insult
to the name chowder. In February 1939, a bill was introduced to
the Maine legislature to make it a statutory and culinary offense
to put tomatoes into chowder.

FOR THE HEALTH OF IT
Enjoy that bowl of Clam Chowder
It’s not easy to give a nutritional breakdown of home made, clam chowders,
recipes vary so much.. Fat content is moderate to low, saturated fat is in the
milk, bacon, fatback and clams. Milk base chowders should not be a meal you
consume daily, but is a great treat.
If you are thinking that a can chowder would be better, I’d think twice.
Canned chowders and many found at chain restaurants are very high in                            sodium(yes! salt).