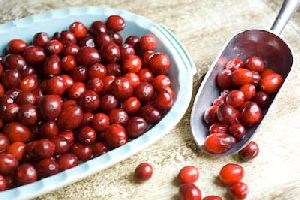 Cranberries were first used by Native Americans who
discovered the berry’s versatility as a food, fabric dye and
healing agent. Today, cranberries are commercially grown
throughout the northern part of the United States, with
Massachusetts being the largest producer. The United
States produces 88% of the world’s cranberries. The
cranberry, along with the blueberry and Concord grape, is
one of North America’s three native fruits that are
commercially grown. The name “cranberry” derives from
the Pilgrim name for the fruit, “craneberry” so called
because the small, pink blossoms that appear in the spring
resemble the head and bill of a Sandhill crane. European
settlers adopted the native American uses for the fruit and
found the berry a valuable bartering tool. American
whalers and mariners carried cranberries, which contain
Vitamin C, on their voyages to prevent scurvy. In 1810,
captain Henry Hall became the first to successfully
cultivate cranberries. By 1871, the first association of
cranberry growers in the United States had formed, and
now, just over a century later, the United States harvests
approximately 36, 000 acres of cranberries each year
Source: www.cranberryinstitute.org

FOR THE HEALTH OF IT

Healthy living with Cranberries
Cranberries and cranberry products offer many important
health benefits. Historically, Native Americans used
cranberries to relieve a variety of ailments. Toady’s health
research points to promising new evidence that cranberries
are not only a healthy, low calorie fruit, they may also help
prevent urinary tract infections and reduce the risk of gum
disease, ulcers, heart disease and cancer.
Urinary Tract Health: Just 300 ml of cranberry juice
daily could prevent urinary tract infections. A study
published in Oct 1998, identified a compound in
cranberries that prevents micro-organisms and bacteria
such as E. Coli from sticking to the cells of the urinary
tract. Researchers call this property: anti-adhesion”
Dental Health: In Dec 1998, a team of researchers
determined that the same “ anti-adhesion” properties that
prevent bacteria from forming in the urinary tract, prevents
bacteria from forming in the mouth.