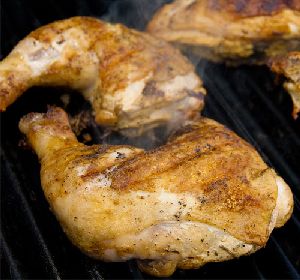 It was at an outdoor market called “The Windmill” outside PennYan
NY a few years ago. Beautiful rolling country side, many local Amish
and Mennonite crafts, baked goods and food. We were walking
enjoying the beautiful morning, sampling and buying a few things.
An aroma filled the whole market with the smell of someone
barbecuing. Being the chef I am, I had to find out where and what
was cooking. I introduced myself to the man grilling the chicken
halves and we got talking about barbecuing, catering and chef talk.
His chicken was golden brown with an aroma, no one could top. I
asked what kind of ingredients he had in his sauce to give it that aroma
and color. He kindly showed me the big container of homemade sauce
and told me what was in it. He said that it was a popular sauce in that
area. I thanked him for his time and said that I’d have to give it a try.
Well time flies and about 9 months ago I was researching something
on “youtube” for vacation, one click lead to another and I found this
very chicken recipe and the history behind it. I found me a jewel and
hope you find it the same.
The “Cornell Chicken recipe” better known to Upstate New Yorker’s
as “State Fair Chicken” was the brain child of Dr. Robert C. Baker.
Dr. Baker was the Cornell University poultry science and food service
professor, who was considered by some as the Thomas Edison of
poultry. Dr. Baker was hired by Cornell University in 1957 to
promote the poultry farming in NY state. Dr. Baker was credited for
over 40 poultry and turkey innovations that changed the way the world
prepares and eats poultry. He created products such as turkey ham,
ground poultry, poultry cold cuts, and his most famous, the chicken
nugget. Yes!, the chicken nuggets that the world enjoys , was the
brain child of this great scientist. What about the sauce you ask ! Yes!
this was his invention also. He created this sauce early in his career
and his family opened the “ Baker’s Chicken Coop” at the New York
Sate fair ground in Syracuse. This chicken coop has been serving fair
goers for over 60 years. With his creativity of poultry he was willing
to share this recipe with everyone. If you travel anywhere in central
and upstate NY, you will find this “Cornell Chicken” being served at
almost every fire department, church, and civic area fund raiser.
The key to making this chicken so great is the marinating and the
constant basting during cooking. Dr Baker suggests that to cook
broiler chickens, you need high heat with a non flaming fire. Broilers
should be placed over the cooking fire after the flames are gone. Use
the sauce as a basting material. During cooking the sauce should be
brushed on the chicken every few minutes.
Note from the Chef: Knowing your grill is very important. There are
so many different styles of charcoal and gas grills, from factory built to
hand-crafted. I mention this because not all grills can preform all
tasks. When preparing BBQ chicken in general you want a consistent
medium heat , for gas 250° to 300° and your heat source at least 4-6
inches from cooking grate. Many new gas cookers that you buy have
the heating element just a couple inches from the grate. You will need
to cook the chicken away from the direct heat or cook on one side of
the grill and have the heat source on the other.