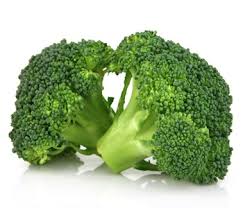 I thought that broccoli would be a great item to look at                                                                     and talk about. Only problem is that other
than its great, did I say Great, yes! “ Great” nutritional value,
broccoli is kinda boring to write about. Broccoli just grows,
gets picked, then eaten, no interesting history. Well, we’re
going to give it a try anyways. Broccoli is from the cabbage
family, with a green and bushy texture. Broccoli is made up of
many strong branches or arms that grow from a main steam,
each one sprouting a sturdy budding cluster surrounded by
leaves. The name came from its Latin heritage “ bracchuim”,
which means strong arm or branch. Roman farmers called
broccoli “ the five green finger of Jupiter “. In the 17th century
when broccoli was unfamiliar to many cultures, it was confused
with cabbage and cauliflower and often the same name was
used to described all three. Broccoli history goes back to
ancient time, believed to start in the Asia Minor area by a group
of people called Rasenna.. The Rasenna began cultivating
cabbages, the precursors to broccoli. The broccoli moved to
the Mediterranean areas and was well excepted by the Romans.
Broccoli was cultivated into the plant we are familiar with
today. Centuries later broccoli made its way to France then
England, where it was not accepted well. Thomas Jefferson
was an avid gardener and brought some seeds back to America
and grew them for himself and friends. Italian immigrants also
brought this plant to America and grew it in their backyard
gardens for themself . Broccoli was not accepted well in
America, until the D’Arrigo brothers, immigrants from Messina,
Italy began with some trial plants in Calif. They sent this
broccoli to the Boston, Mass., which was received with great
success. Today broccoli is grown commercially grown in Calif.
and Arizona. Broccoli is a cool weather plant, that can not
handle hot summer heat. It’s usually planted in May and
harvested in the winter months. About 20 million lbs of broccoli
and cauliflower are grown annually world wide. China being
the largest producer, United States is third with about 1.2
million lbs.

FOR THE HEALTH OF IT
Broccoli & your health
Broccoli ranks right up there as being one of the best vegetables that
you can eat. Broccoli is high in vitamin C and K and soluble fiber and
contains multiple nutrients with potent anti-cancer properties. A high
intake of broccoli has been found to reduce the risk of aggressive
prostate cancer. Broccoli leaf is also edible and contains far more
betacarotene then the florets. Broccoli loses much of its nutritional
value when over cooked. Remember to cook for a short time period,
micro waving and stir-frying will help retain these important nutrients.
Broccoli is great raw as a snack, on a vegetable tray and in a salad.