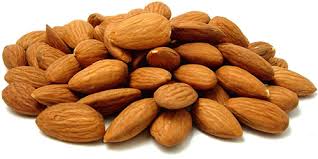 The next time you see this crunchy, buttery flavored nut
you will be a little bit more knowledgeable. California is
the only state in the United States that commercially
produces almonds. California produces 80% of the
world’s almonds due to it’s Mediterranean climate.
There are more than 6000 almond growers and 115
almond handlers in California. 550,000 bearing acres are
used to grow these delicious almonds. In 2004, California
almond growers produced 998 million pounds of
almonds. This follows two record breaking years as the
3rd largest almond crop in history The largest almond
crop on record was produced in 2002 when 1.084 billion
pounds were harvested. Let’s break this down a little to
understand how many almonds that is. A tractor trailer
holds, 50,000 lbs, the average truck length is 70 feet, if
you line up these trucks with one years almond crop they
would stretch 265 miles. California ships 70% of its total
crop to more than 80 countries throughout the world.
The almond tree is a small tree growing 4-9 feet tall. The
flowers are white or pale pink, with serrated edge leaves.
Most almonds are eaten on their own, either raw or
toasted some dishes. Almonds can be processed into a
milk substitute simply called almond milk. Sweet
almonds are also used in marzipan, nougat, and
macaroons.

FOR THE HEALTH OF IT
Almond Nutrition News
* Eating just a handful of almonds may be a valuable tool
to combat some of America’s leading health threats,
including obesity, heart disease and diabetes.
* In a clinical trial published in the American Heart
Association’s journal Circulation, men and women who
eat one daily ounce of almonds for a month lowered their
LDL cholesterol by 4.4 percent. Those who ate two daily
ounces of almonds lowered their LDL cholesterol even
more – by 9.4 percent – and maintained their weight.
* Independent analyses show that almonds are the most
nutritionally dense nut, whether compared calorie per
calorie or ounce per ounce.