Skip to content
Previous Next
Why are bell peppers different colors ? 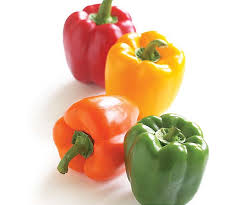 A bell pepper is a cultivar group of the species “capsicum
annuum” and is in the same family as tomatoes, potatoes and
eggplant. A green bell pepper the most popular and inexpensive
to purchase, is an unripened pepper. Meaning that if left on the
vine it will change to it’s true color, such as red, yellow or
orange. The cultivar (variety)or make up of the seed planted
will determine the color of the ripened pepper. Green peppers
are not as sweet as the mature colored peppers. Peppers have a
recessive gene that prevents capsaicin from being produced, so
they lack the spiciness of other peppers.
Peppers are called by many different name through-out the
world. British England it’s “Pepper”, New Zealand, India and
Australia it’s “Capsicum” and across Europe, some countries
refer to the bell pepper as “ Paprika” Brazil it’s “Pimentos”
meaning “Big pepper”
Little did Christopher Columbus know when he landed in the
new world that he would be introducing the world to so many
foods. Columbus is credited for naming the bell pepper. He
named it pepper for its similar taste to the highly prized
peppercorns, of his day. He carried the peppers and seeds back
to Spain were its popularity grew quickly. The bell pepper was
domesticated in Central America and Mexico.
Florida is the largest producer of bell peppers in the US.
Producing 40 % of the peppers consumed, and 100 % of the
winter crop. California, Texas, N.C., GA., VA., N.J. and
Kentucky are also large producers. China is the worlds largest
producer of peppers with 6-7 times that of Florida.
In 1970 the per capita of peppers consumed was 2.2 per person
yearly, 1995 consumption was 5.95 per person yearly
Colored peppers (including green) add color and a lot of flavor
to any dish , they can be eaten raw, cooked in dishes or served
as a cooked side dish. Pepper Care: Place fresh peppers in the
crisper of the refrigerator, They should last at least a week or
longer. Peppers at room temperature rot quickly. Always wash
before using fresh peppers. If you can’t use the pepper in a few
days, slice or dice and freeze it in a ziplock.

FOR THE HEALTH OF IT
Sweet Peppers
Sweet peppers including the popular bell pepper are a valued
fruit in your diet. ½ cup serving of bell pepper delivers the
RDA of vitamin C, a high level of vitamin A and a respectable
amount of vitamin E. A ½ cup of peppers has only 12 calories
and is sodium and fat free. Red and orange peppers have had
more time to mature and have a higher level of vitamins. As
with most foods fresh will be the highest in nutritional value,
over cooking will reduce the vitamin content.