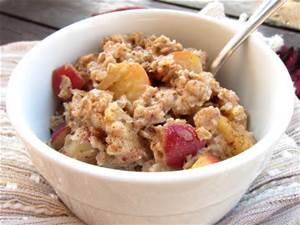 What is oatmeal ? We have all grown up eating oatmeal,
that cheap breakfast food in a round container. What is an
oat ? Lets go out to the field and see exactly what an oat is
or is not. Are oats part of the whole wheat plant, no, oats
are their very own plant called oats. Oats grow to be 3 feet
tall. Oat seeds grow in clusters of three or four (called
panicles) while other grain seeds, like wheat and barley,
grow in rows. Oats grow best in cool, dry climates and are
resistant to drought. Nowhere do oats take up as high a
percentage of farmland as in Scotland. Wild oats have
grown in Asia and the Middle East for thousands of years.
Historians speculate they were first cultivated in
southeastern Europe around the first century AD. Oats are
grown primarily in the North central states, because of their
relatively cool weather. The United State produces only 13
to 16 percent of the worlds 2.5 billion bushels grown
annually. During the 1950’s the United States produced
over 1.5 billion bushels of oats and was the worlds largest
exporter of oats. Today we only produce about 300 million
bushels and import 50-80 million bushels annually. That is
15 to 25 percent of our domestic use.
Source: www.ngfa.org/trygrains_oats.asp www.wholegrain.umn.edu/grains/oats/cfm

FOR THE HEALTH OF IT
Eat your Oatmeal !
In 1997, the Food and Drug Administration announced that
the fiber from oatmeal may reduce the risk of heart disease.
A serving of oats (half a cup, cooked) has nearly four
grams of viscous soluble fiber ( called Beta-glucan).
Studies have shown that a diet high in viscous fiber such as
Beta-glucan helps lower blood LDL cholesterol (so-called
“bad” cholesterol) levels, a risk factor for heart disease.
Such diets may also help stabilize blood glucose levels,
which could benefit people with non-insulin-dependent
diabetes. Oats also contain high amounts of protein, along
with important vitamins and minerals such as vitamin E,
calcium, B-vitamins, phosphorus, magnesium and
potassium. Oats have some unique fatty acids and
antioxidants which together with vitamin E (found in oats
and oat flour ) slow cell damage and have been shown to
reduce the risk of cancer.
Source: www.wholegrain.umn.edu/grains/oats/cfm