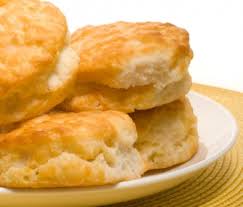 You maybe asking why I wrote baking powder biscuits, not just
biscuits. The word biscuit can be used for describe a large variety of
small baking products, from a hard sweet cracker, to a savory flat cake.
The biscuit that you and I see at the fast food restaurants, in the freezer
section and on mamma’s Sunday dinner table is actually an English-
American version. Even though biscuits have been around as long as
man, baking powder biscuits did not come on the scene until the late
1900 Century. BP was invented ((discovered) as a chemical for
leveling of baked goods in 1854. Let’s look at what a BP biscuit is
made up of , then we can look at where, when and why baking powder
is so important in our biscuit. BP biscuits are made up of flour, fat
(lard or shortening, sometimes a little butter) salt, baking powder,
and milk (buttermilk, sour milk, cream). Biscuits must have some
kind of leveling agent to allow the biscuit to rise. For 100’s of years
before BP was invented, cooks would use yeast as a leveling agent if
they wanted a biscuit to rise. In the late 1700’s to 1800’s people started
to experiment with different ingredients that could level dough without
the timely method of using yeast. Cooks found that they could mix
sour milk(clabber) with other ingredients to help their dough rise.
They could also mix potash (pot-ash, hence, ashes from burnt wood)
with sour milk to get a leveling agent. In the mid 1800’s it was
discovered that quick breads could be leavened by mixing cream of
tartar and baking soda to create single acting baking powder. That’s
enough history for now, lets talk about biscuit production. When you
speak to a chef, bakers or seasoned home cooks, there are two things
we all harp(emphasize) on when making baking powder biscuit. That
is ”do not over mix”, and “ make sure the oven is at the right
temperature when you place them in the oven”. Place flour, BP and
salt in a dry bowl, mix slightly. Add shortening, cut into flour with two
butter knives or a hand pastry blender until the shortening is about pea
size. Make a valley in the center of the flour mixture, pour the liquid
the valley, mix only until no dry flour remains visible. Drop onto a
floured work surface, sprinkle a dusting of flour over dough, press
down the dough about 1 inch thick. Fold the dough over on all 4 size,
turn the dough over and tuck in the sides. Roll or hand press the
dough out to desired thickness. Cut with cutter or glass, connecting the
circles, to use as much dough a possible the first time. You can re-roll
and cut the biscuits up to two more time ( these biscuit will be a little
tougher. Butter the bottom of a sheet pan, bake in a 425°F- 450°F
oven for 8-12 minutes.