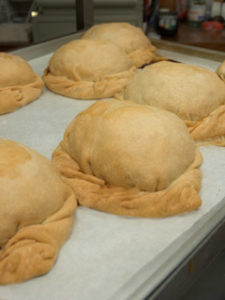 This small shop offers fresh baked pasties, homemade fudge and souvenirs. You noticed I wrote pasties no pastries. These are not a sweet dessert but a savory pie crust filled meat and potatoes, folded into a turnover (pie).

The History of the pasty: In approximately 1864, Finnish immigrants, along with Cornish miners, came to find work in the “Copper Country” of Michigan’s Upper Peninsula. Pasties were the perfect, hardy meal for the miners. Their wives were able to use the potatoes and meat from leftovers, and envelope them in a crust which could be placed in the miners’ pockets in the morning, and they would still be warm at lunchtime. Pasties came to be known as a “one-handed meal.” The miners, with their dirty hands, could hold on with one hand and eat their way through the pasty, leaving only a small crust left over. To this day, pasties remain a staple food and tradition for many Upper Peninsula families.

They offer the traditional beef or chicken. They also offer a vegetable pasty and have introduced a apple pasty.  You can buy them hot to eat now or take them home and refrigerate and reheat  later.

What I also found neat about their store besides the pasties was there gift shop.  Back in April 2012 the “Big Foot hunters” from “The Animal Plant Channel” visited a did a hunt in the Munising area. They found Muldoons and tried their pasties. They real enjoyed the pasties and visited a couple time during this hunt. On the show they feature the store and show them getting served pasties by the owners on there front porch.  They gave permission to the store to be an authorized distributor of authentic BFRO  and Sasquatch  gear.

Debbie and I tried a beef and a chicken pasties, we also bought the gravy to eat with it.  Very good!